The album is available online from HMV, AMAZON and iTUNES.

You must buy before 11.59pm today (Saturday) for your purchase to count!

There are two main reasons why Leona is still a threat, we must not get complacent:

a) She is a ‘Saturday artist’. This means she normally sells a lot of units on Saturdays when her family fanbase are out doing the weekly shop in the supermarkets. Leona is stocked in most supermarkets, Jake is not.

2) X Factor. Leona is managed by Simon Cowell, we expect him to use the X-Factor (still watched by 10million odd people, compare that to the few hundred thousand that watch Soccer AM) to full effect to give Leona a huge boost pre the 11.59pm deadline for sales to count.

It’s definitely on, but it’s far from a done deal – #SpreadTheBuggLove.

JAKE BUGG is Number One in the official UK midweek album chart! But it’s close, Leona Lewis is closing in on Jake so we must keep buying the album, this is a modern day David and Goliath, Clifton lad Jake up against the Simon Cowell empire!

The album is available online from HMV, AMAZON and iTUNES.

In town the album is in FOPP and you can buy the vinyl from The Music Exchange.

Sales at all the above outlets will count towards the chart. You must buy the album before 11.59pm Saturday for it to count!

We also need you to SPREAD THE BUGG LOVE online, we’re up against the might of Simon Cowell here! If you do spread the love you could also win yourself some cool stuff, full deets HERE.

Get your “we’re supporting Jake Bugg” facebook banner HERE. (Still being worked on!)

Is going to be huge for the most vibrant music scene in the UK, our editorial thoughts are HERE

Not one but two debut albums with a genuine chance of going Top 20, maybe even that hallowed Number One! For the artists this represents the chance to realise a dream, yet this is bigger than solely the ambitions of DOG IS DEAD and JAKE BUGG. This is a chance for the whole Nottingham music scene to shine, the focus of the music industry has been on Notts for a while now, record label A&Rs know we are home to the the most vibrant music scene in the UK. Now is the chance to get the message out to the music lovers of the whole UK.

The national media is getting the message too, The Guardian were pioneers a year ahead of the game with this article. We’re hoping for a lot more national media coverage in October. And we’re expecting lots of local and regional coverage from the BBC, Evening Post and other media outlets. Radio 2 have already hailed Nottingham as, ‘the capital of music’.


NATALIE DUNCAN’s debut Album ‘Devil In Me‘ is expected to get a big boost from her appearance on Jools Holland on Tuesday, hopefully that will be the catalyst for a surge up the album chart in early October! Could we get three Nottingham artists in the Top 40 in October?!?!?!? See her in session for Leftlion and Poddingham HERE. Buy her album HERE.

Monday 8th October DOG IS DEAD release their debut album ‘All Our Favourite Stories‘ on Atlantic Records. Full info on tracklistings, PRE-ORDER DEETS and a special Nottingham show HERE. STOP PRESS – The album is now out and available from HMV, AMAZON and iTUNES.

Monday 15th October JAKE BUGG releases his debut album ‘Jake Bugg‘ on Mercury Records. Full info on tracklistings, PRE-ORDER DEETS and the like HERE. STOP PRESS – The album is now out and available from HMV, AMAZON and iTUNES.

Why Pre-Order? It helps build vital momentum for an artist, early pre sales can encourage the record label to put more resources into promoting an artist. Absolutely crucially they are looked at by radio stations when considering playlist decisions. In a very real way pre-ordering an album can have more impact than buying once it’s released, you know what to do!

Friday 26th October till Sunday 28th October a weekend of events celebrating the UK’s most vibrant music scene. More details on the latest New Music Podcast, listen HERE. The facebook page for the BRANCH OUT FESTIVAL is HERE.

A number of other fabulous events will be taking place in October including GAMECITY and the FESTIVAL OF NOTTINGHAM, the later in particular promises to massively embrace the most vibrant music scene in the UK. The #NottinghamRocks twitter campaign that inspired FoN has already given birth to this awesome GIG.

Our first Nusic Academy workshop featuring figures with a national influence, including two coming up from London especially for the event. 5pm for 6pm – Friday 26th October at Antenna, Subject = ‘How to succeed in the music industry’. Line-up deets and tickets (free) HERE. 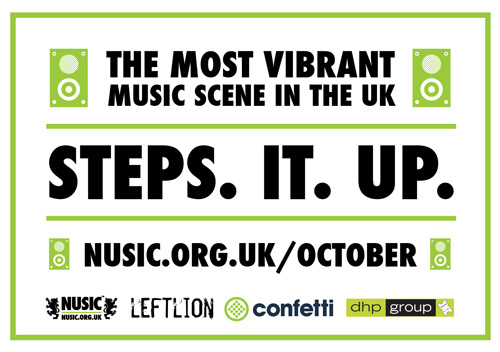