bUTTON pUSHER and I’M NOT FROM LONDON present BITTER STRINGS, FRESH EYES FOR THE DEAD GUY, AXIS OF and WANDERLINGS at THE CHAMELEON 23rd of February

THE CHAMELEON has without doubt cemented itself as my favourite music venue in Nottingham with its cosy surroundings, ludicrously loud sound system and 6.4% raspberry cider. On Thursday it played host to a mouth-watering line up of Nottingham bands and some killer Irish punky goodness.

Indie rockers BITTER STRINGS opened the evening and immediately the brain is racking itself to work out who these guys sound like. The conclusion? It’s like a wolf has swallowed a monkey, the wolf in question being a WOLFMOTHER and the monkey being from arctic origins. They probably hear this a lot but BITTER STRINGS have a striking resemblance to the ARCTIC MONKEYS with their “reet” northern vocals and playful bass twang but there is more to them than that. They are quicker, heavier and somehow darker. The calibre of song writing ability is fantastic with thought provoking lyrics and opening riffs catchy enough to drive you mad. The whole set is drenched with 60s Rock n Roll influences and after debuting some impressive new material the lads even treated the punters to a glorious ROLLING STONES cover of Jumpin Jack Flash. At the start of their set BITTER STRINGS were playing to a handful of punters but as the final song draws to a close the numbers in the room have tripled and as a romantic optimist I put this down to people walking past the venue, hearing the buzz of live music and checking it out.

Next up are the ever entertaining FRESH EYES FOR THE DEAD GUY, combining their unique brand of car crash thrash punk and comedic ramblings between tunes – this rabble never cease to put on a cracking show.

“Hello we are FRESH EYES FOR THE DEAD GUY and that was the sound of a guitar hitting a bass.” 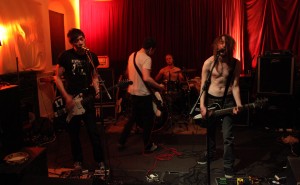 Approximately 30 seconds into their set, three quarters of the band are topless and immediately the incredulous energy levels are on display as the guys hurl themselves around the stage. Power chords reminiscent of RISE AGAINST and the hectic hard-core punk demands the punters shuffle to the front of stage and head bang along with the gang. Exuberantly chaotic riffs and a gritty determination to sacrifice every drip of sweat into the performance make FRESH EYES FOR THE DEAD GUY one of the heroic elements in our music scene.

AXIS OF, like most things Irish, are instantly lovable and a welcome addition to the line-up amongst the local heroes. As they finish their set and WANDERLINGS take to the stage, instantly there is something intriguing about this band. Visually they have a certain aura about them, it’s almost like the word enigma has been forced into skinny jeans and boat shoes. Despite a guitar disaster minutes before their set and hastily borrowing a BITTER STRINGS guitar in replacement this band sound tight throughout the performance with a quiet assurance and determination in what music they want to make. Effortlessly shifting pace during the set, comparisons to SMASHING PUMPKINS and THE PIXIES are easily made with the velvety punk undertones and delicate vocals with are brought together creating a dreamy shoe gazer sound.

Nights like this conjure up mixed emotions as a music fan. The bands on show tonight were seriously impressive, extremely talented and a downright pleasure to watch. Walking home, I can’t help but feel a huge sense of frustration as to why more people didn’t experience the bands I did tonight. The Nottingham music scene is unbelievably exciting and people need to take a chance on gigs. Don’t go to gigs just to watch your mates perform and then disappear, hang around, check out some other acts and you might just discover your next favourite band.

Yours in Love of New Music,
Tom Hadfield