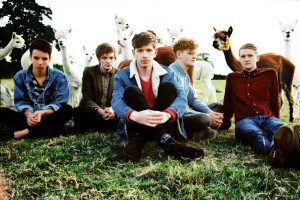 We first played the catchy tunes of DOG IS DEAD in the summer of 2008, and they did their first Future Session with us over two years ago. Now they’re signed to a major label with their sights set on living out the musical dream. Mary Ann Pickford caught up with the guys to chat about death, Santa and their new single…

So Hands Down is now out! You guys excited?

Robert: Yeah it’s really cool. It’s pretty exciting and so far the feedback’s been really great. We hope we can get people to buy it rather than just enjoying the video and things.

I saw the video actually and it looks really cool. Looked like a lot of fun to make it…

DID: Yeah yeah, it was really fun.

What’s the decider for your songs to be a single then, do you guys know before you make it or is it like, ‘this is it, this is the one, this is the anthem’?

Trev: We’ll write a handful of songs that are potential singles. We’ll never write something to then say ‘this will be the single’ ‘cause it might not necessarily be the next single. That’s kind of the collective decision.

Robert: With a band like ours, we’re never going to sell a million singles. And bands are finding it hard to sell singles these days so it’s kind of like, what would I wanna put out as a nice taster and quite an easy representation of what we’ve got going on at the moment?

What was the idea behind the new single when you first thought of it, lyrically?

Robert: Well it’s weird ‘cause I wanted to have this like- I really wanted a big chorus with a really easy declaration, like a universal feeling of love basically. So that’s how it came about. But the verse lyrics are quite a bit darker and about death and religion and stuff, but it’s really hidden and metaphorical, and it’s still quite an upbeat Christmas sounding song. We want it to sound like Christmas basically…!

But it’s still got this undertone of-

Joss: It sounds like one of those really bad Christmas B movies – Santa’s coming! But he’s going to kill you… [laughs]

Then comes an onslaught of alternative single names for Hands Down…

Trev: Santa Claws… C-L-A-W-S and he goes and slashes people with his claws-

Haha! So Rob, is it fair to say you usually write all the songs or does everyone pitch in? What’s the process behind the song and music writing?

Robert: Yeah I write the songs, the lyrics and the basic structure, then bring it to the table and everyone picks a part and adds their stamp to it.

Cool. On a different note, you’re all from West Bridgford, is that right?

DID: More or less…

Trev: Us three are [Robert, Joss and Trev] and Paul who’s not here, he’s from Stapleford and he [points at Harvey] is from bloody Epworth.

Harvey: Yeah I’m from about an hour and a half away from Nottingham.

Robert: But he lived in Nottingham for 17 and a half years.

Joss: Epworth’s got quite a good music scene…

Harvey: Yeah it’s up there with Leeds and Nottingham.

Joss: You’ve got those venues like the village hall…

Harvey: [laughs] And we’ve got a pub as well.

The point I meant was, with all of you being from Notts more or less, what do you guys think of the scene at the moment?

Robert: Well it was totally different til about, three minutes ago [laughs]. When we started out there was never a problem getting started, every opportunity was there. And it was very easy, very effortless being a young band in Nottingham when you’ve got a little bit of a base- college was like our springboard I guess. And there has never been a problem there but there had been a kind of limit to where everything could go. And I think recently that barrier’s been shattered because people are doing alright out of Nottingham now and it’s cool that we’re a part of it. I wouldn’t say there’s a scene but I would say there’s about four or five different artists doing very different things with a lot of support for each other and whether that constitutes as that, I don’t know, you decide. But now it’s raised the roof and there are no limits.

Yeah I met you guys quite a while ago, three years actually, while you were doing the then Notts Unsigned Future Session. What was the transition like from becoming unsigned to signed?

Robert: Well everything goes in its natural progression and you get to different stages, and after a while you’re like cool we’ve been playing together for quite a while and we know we’ve got a few decent songs now’. It’s only a matter of time before someone takes notice if we get people from towns outside Nottingham to come to our shows. Then it’s like another career choice that actually comes about because we’ve been playing and working so hard. But it’s like a nice little mark for us to make it here so far. It’s all in those tiny little progressions and stages and we’ve got our own boxes to tick and things we want to do…

Did you guys have any expectations of what it’s like to be bigger, or signed?

Trev: I guess I didn’t really have a lot of expectations. I’m quite cynical of the whole stereotype where you get signed and it’s like ‘yeah it’s massive man, let’s go on tour and score some chicks!’.

Joss: You never really think as soon as you’re signed you’re in the top ten.

Trev: Yeah exactly, it isn’t really like that but I love how it’s going. It’s just like, you get signed THEN the work starts.

Robert: You get so many bands that get signed and they think that they’ve done their piece and they’re like ‘that’s it’ and they can be rock stars, but it’s totally what it’s NOT about for us. We’re kind of like, thanks for giving us this bit of opportunity to bring out an album which is what we’ve always wanted to do. So far everything’s great. It’s hard work but we’re putting that pressure on ourselves to make sure that everything goes right.

What’s the hardest thing about being in a band and touring?

Trev: I think one of the things I find hard is staying healthy and maintaining your voice, ‘cause we all sing in five part harmonies. If you go out drinking and smoking all day, it wrecks your voice.

Joss: And when we all start to go on tour, then we come back, and we’re really fat…

Joss: Well you know what I mean, compared to how we were.

Robert: If you’re doing a tour or something you’ve gotta look after yourself.

So what’s the main ambition for you guys collectively?

Joss: I’d just like to make an album that a lot of people enjoy.

Robert: That we’re totally proud of too. Making a record is just gonna be the biggest thing ever, ‘cause we’ve been together three years -longer than that actually – just jamming about, and it’s like, when are we going to make this album? When are we gonna do it? So it’s going to be great to put that on first time and go ‘I’m totally proud of this, I have faith in this, get really ambitious and see where it goes’. You’ve done your bit then in that sense and it’ll be up to the world to decide whether you’re going to be a success.

Any last words to your fans?

Robert: We’re not dying… [laughs] Well, we’re having a good time, we hope everyone else is, oh and buy our new single!

DOG IS DEAD‘s new single Hands Down is available to download now PLUS a limited edition signed 7″ vinyl is available from roughtrade.com or FOPP in town.

We’ve also teamed up with the band to give one Nottingham act the chance to support them at their Rock City headline show on December 17th. Entries have now closed but you will be able to vote on which of the ten semi-finalists make it through to the final five. The public vote will launch on Monday 7th November.