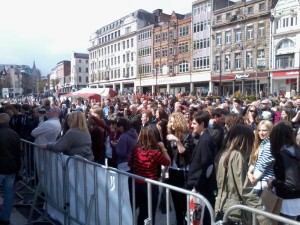 Reigning champions of the Future Sound of Nottingham THE MONEY opened the mini-festival with a typically lively display. There is a certain lovable swagger about this band, whether its Stav’s graffitied converse or Jake’s pink shades, they rock and they know it. Showcasing old favourites and some new material, the four piece attracted punters to the Square like drunks to a kebab shop. Their self-styled brand of club/rock is unmistakeable and having smashed it on the main stage at Splendour last year the future is brighter than ever. My Money is on THE MONEY.

Despite a momentary torrential downpour minutes before his set, JOE DANKS took the stage with the hardcore Dank fans (can we call them Dankers?) still in attendance. His chirpy style of folking fantastic country tunes made the rain seem irrelevant as The Square was transformed into possibly the biggest barn dance the planet has seen. This guy isn’t just another name on the ever-growing list of singer/songwriters in Nottingham, his enthusiasm and calibre of song writing ability (not mention his cracking voice) are all indicators that this guy has huge potential. Well played Joe.

Next on the bill were previous semi-finalists of the competition hip hop funkers THE AFTERDARK MOVEMENT. This band are fresher than Greggs at opening time and smothered in funky goodness. Lyrics about lego and Nottingham Forest had the locals busting the moves (except the County Fans) and the energy levels and pure love for the tunes were appreciated by all, even the goths and rockers were skanking to this band! Can imagine these guys playing alongside DIZZEE at splendour! If you missed them then check out our Future Session with them HERE.

Indie rockers THE SPECIES took the stage with a certain air of anticipation around The Square. These guys have a reputation around the scene as one to watch and whilst sounding like the ARCTIC MONKEY’S evil little brother combined with KASABIAN-esque vibes they sound totally original. Their track “Broken Glass” is an absolute stormer and would not be out of place on the main stage at Rock City, if you missed them you can check them out on our most recent Nusic New Music Podcast HERE.

Any nerves that JOY MUMFORD may have been feeling before her set must have vanished as she received a fantastic oviation after the opening song finished. Relatively new to the scene JOY MUMFORD nailed her set with an accomplished style and created a lot of new fans. There is a certain endearing vulnerability about JOY MUMFORD and her music, as the sun beamed down on The Square the people of Nottingham chilled out to her soulful folk tunes. What’s not to love about songs inspired by cake and tea?

Citing influences as diverse as RAGE AGAINST THE MACHINE and DEPECHE MODE this next band certainly had us all intrigued. CRASH JACKET are an all-guns-blazing four piece. With a hint of U2 about them it may be early to call these guys stadium rockers but they certainly have the potential. Guitar solos to melt your brain and a crashing drumline accompanied with frontman Oli’s rock n roll vocals, this lot rock. They’ve promised Nusic that if they get to the final they will have The Rock City crowd “bouncing and moshing”. I can believe it too.

Super slick modster TOM WARDLE took the stage looking sharper than a kitchen knife. The self-described beatle-maniac boomed out his classic pop tunes to The Square with the unmistakeable highlight being his track “Pink Lillies”. Comparisons to PAUL WELLER aren’t the most accurate guide to the Wardle sound, he’s not as moody. Tom’s charm combined with a natural ability to entertain as well as a fantastic song writing ability make him a welcomed element of the Nottingham music scene, and to today on The Square.

The smiliest man in the universe otherwise known as ROB GREEN rounded off the days events with a performance that we have come to expect from this guy over the last few months. Funky soul with RnB influences drew one of the biggest crowds of the day with Giles on guitar and his full backing band, Rob absolutely smashed it and even treated us to collaboration with the brilliant NINA SMITH. Check out our Future Session with him HERE.

If you haven’t cast your vote to see which bands should make the final 6 at Rock City in June you can do that on our Facebook page HERE. Don’t forget that the other 6 Semi-Finalists are playing tomorrow in the Square with 2010 champs LONG DEAD SIGNAL kicking it all off at 1:30pm. Be in The Square or be square…wait what?

Yours In Love of New Music,
Tom Hadfield (@hadfieldreckons)
x